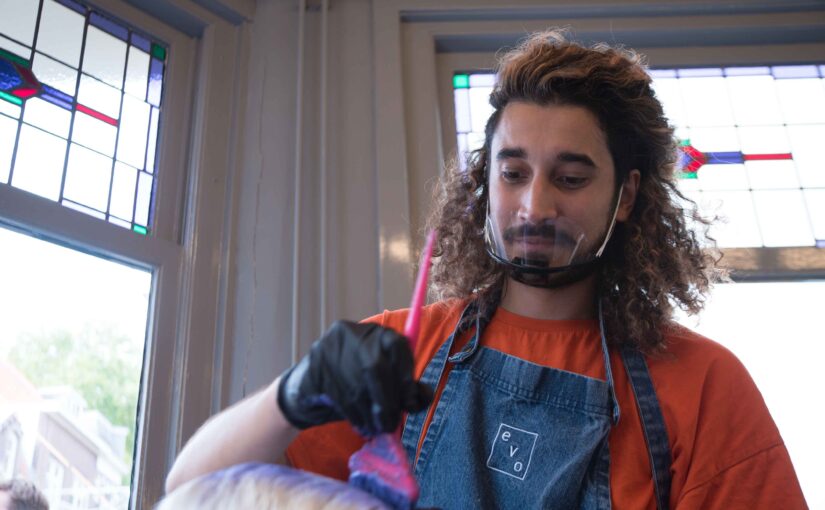 Hairstylist and colourist, Garrincha, of salon SIM SON loves to radically change hair colour. Both for himself and for others. “I think it important to help people do things with their hair that aren’t mainstream.”, he explains in an interview with Klaartje Til. Please learn more about the man who likes to encourage people to step over the line, because, if you want a radical change of hair colour, something inside you opens up.

Garrincha, why are you so fascinated by colouring hair?
I have been colouring my hair since I was 11 years old. I am 28 now, so over the years I have noticed how my hair reacts. I gained a lot of knowledge about colouring my hair and decided to specialise in it. I have very sensitive hair so as a colourist, I think I can handle all hair types.

Why did you start colouring your hair at such a young age?
I saw a cartoon in which one of the characters had pieces of red hair. I also saw Britney Spear’s video clip, Toxic, in which she has red, black and blond hair. That was what I wanted. I took my mother’s blue and red mascaras and I used them to colour my hair. She wasn’t happy that I was using her mascara. But she said, “If you really want this let’s do it the traditional way.” That same week I went to the hairdresser and my hair was coloured red (laughs).

What hair colours did you have?
There isn’t a colour I didn’t have. Red was my first colour. I’ve also had yellow, which is one of my favourite colours actually, purple, blue, green, orange, and black. I have had every colour of the rainbow. 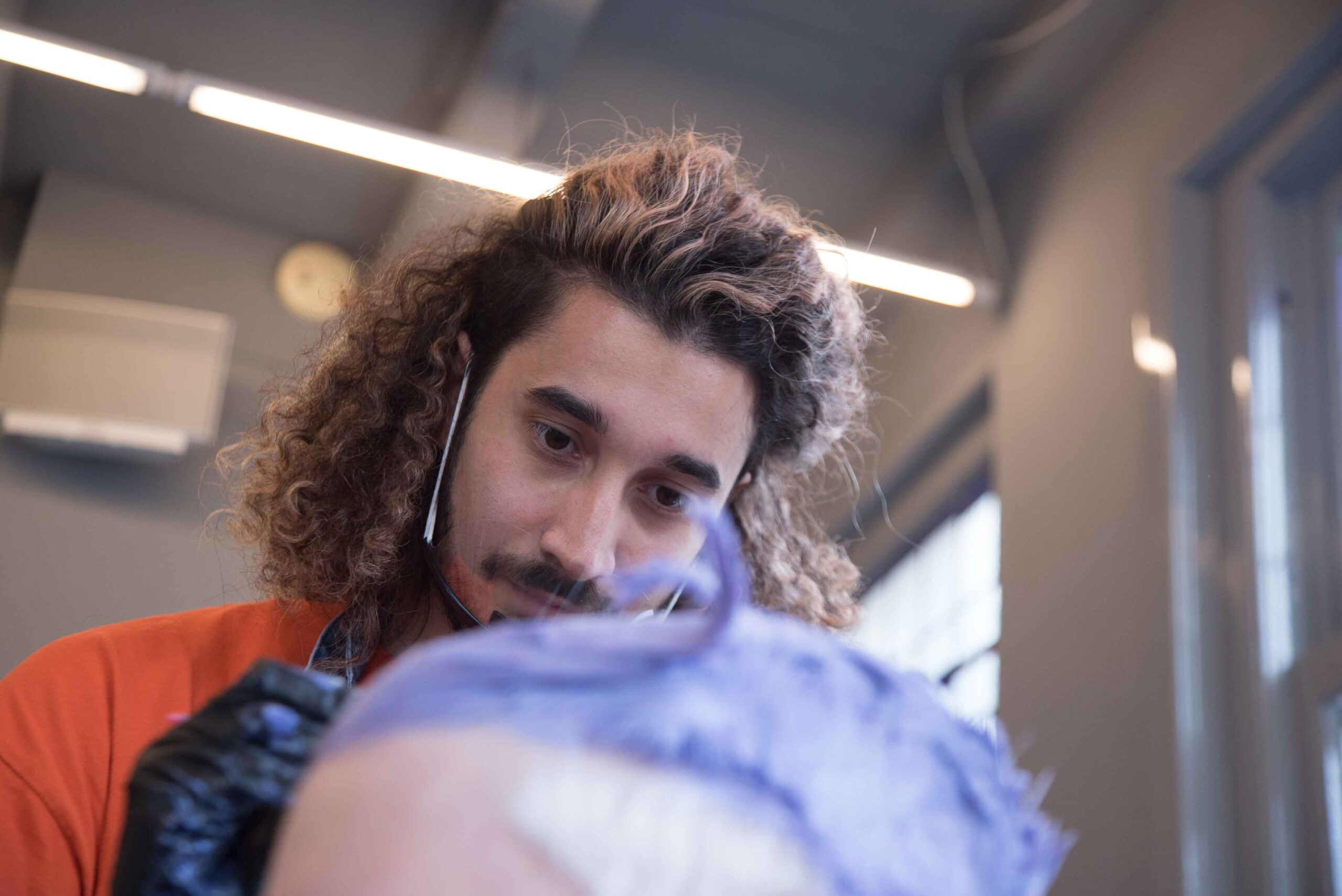 Did you want to be a professional hairstylist when you were young?
When I was young I didn’t want to be a hairdresser. I wanted to make cartoons. But I didn’t find something I was good at, however, I was good at being a hairdresser. I decided to school myself at barber college. Also, on YouTube I discovered a colourist who creates colourful hairstyles. I thought, “Wow, I want to do, what he does.” That inspired my passion for colouring hair.

Your fascination doesn’t lie with the profession of being a hairstylist, but with creating colourful hairstyles?
Love for the profession grew gradually, especially for the creative side of it. It took a while for me to warm to the profession. At first, I was not good at all. Then I worked at a salon where I learned a lot from the colour specialist that worked there. He was a very good teacher. From that moment on, I experimented a lot. 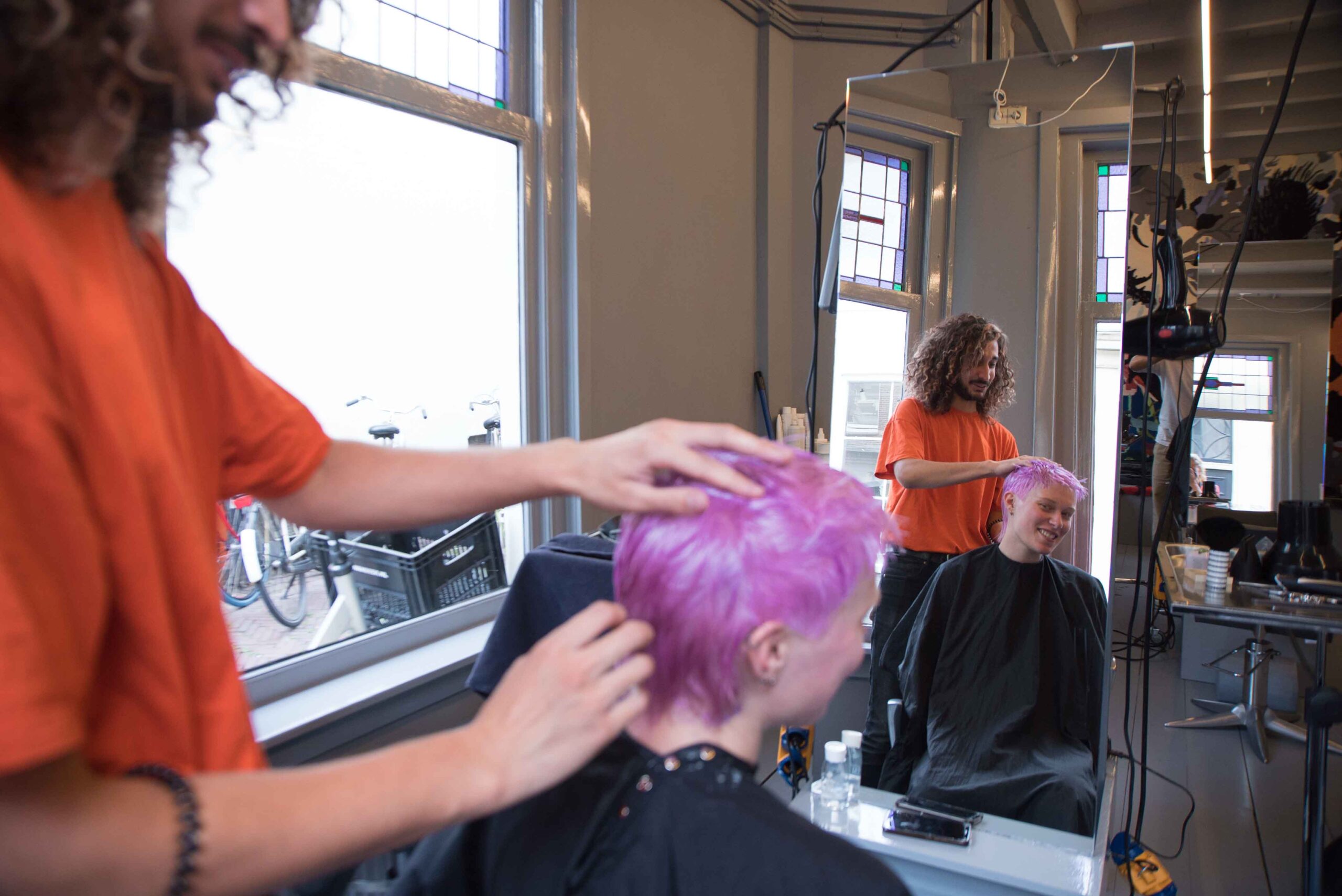 What type of people have their hair coloured by you?
All types of people. Young, old, artistic and commercial. People who want creative colouring. People who only want highlights or have regrowth tinted. But I also have older customers, ladies who go for bright red or pink hair. These are people who go against society’s expectations.

So we can’t specify hair colouring persons as a specific species?
No, not really. It is the need for change. For some people, it symbolises rebellion, especially for young  people between 10 and 18 years old. Others want it to express themselves.

When someone returns to you after you have given the first radical colour treatment, do you notice a change in this person?
People who go for more creative styles, often want more. I have a customer who wanted blue hair at the time. I coloured her hair step-by-step. First I only did blue highlights. And now, five years later, I still do her hair. She had purplish blue hair and then orange.

In the stories that people tell you, do you notice that their wish to want more with their hair, also applies to something else?
People who go for a radical change become more confident. First they worry about the opinions of others. But through the years I noticed from personal stories that they become more confident. They don’t care what others think because they want to express themselves. I think it is very important, that people can be themselves and express themselves in the way they want to.

Do you feel an obligation to give people the opportunity, to respond to this urge?
Sometimes I cut children who would love to have blue or pink hair. Their parents don’t allow it because they fear what others may think. I think that’s terrible. A child shouldn’t have to worry about the opinion of others. I always try to help a bit. Not all parents appreciate that. But I think I ought to be able to do so, being a hairdresser. 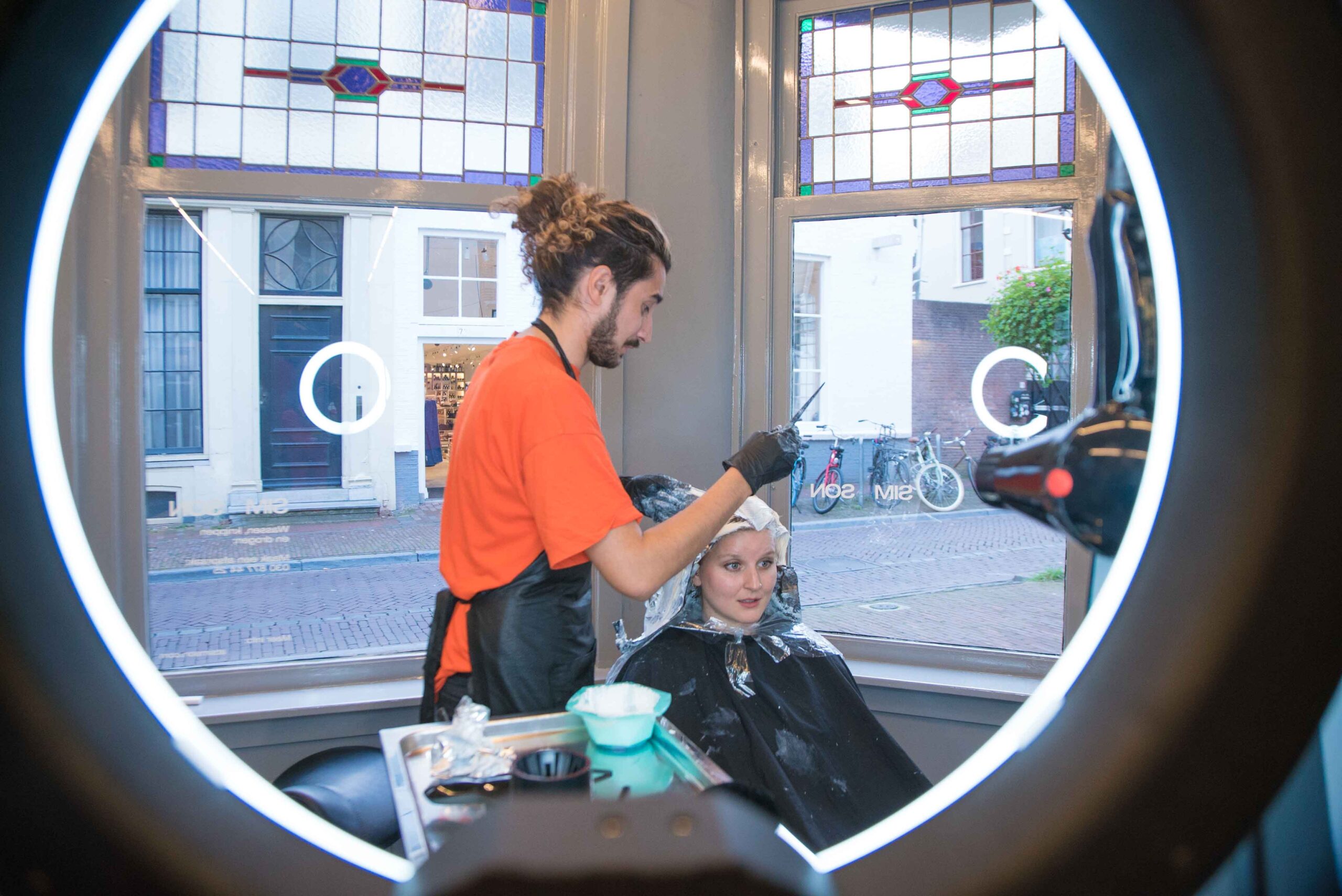 What are your plans and ambitions as a hairdresser?
I want to develop a colour method and pass it on to other hairdressers, to share my love and passion for colouring hair. I want to help hairstylists to create more, to push boundaries and make them feel more confident. You can make many changes to hair with chemicals, such as hair paints and perms. In Japan and South Korea, perms are huge and popular. It would be great to do this here in the Netherlands, and teach these Asian perm techniques. In general they don’t perm in the Netherlands. It is associated with being damaging for hair and sheepskin. But I have noticed an innovative way of working in Asia. It could be an evolution or a revolution when it comes to the West.