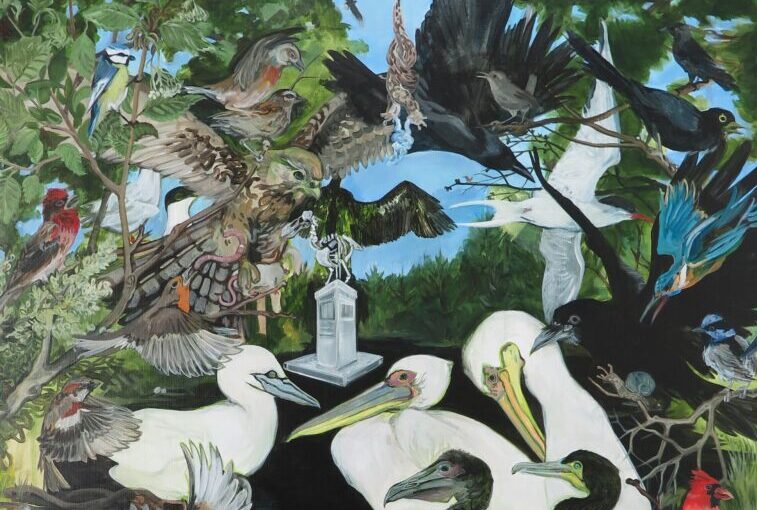 Dutch painter Inge Aanstoot, has been very busy over the last two years. For the Rotterdam Museum, in 2020, she made a mural for the exhibition, Lions on the Coolsingel. In 2020 she also worked under the name, Marie Pop, with photographer Anique Weve. Marie Pop work was on display this summer at the ART Rotterdam fair.

At the end of July, Inge opened an exhibition of 15 paintings at the Amsterdam gallery, Vriend van Bavink. The paintings are large and small and in typical Inge style, expressive, figurative and symbolic. In this series, Inge investigates both well-known and unknown key figures in history: kings, emperors, scientists, inventors, male and female. These people made a difference in the past and they all look you right in the face.

Inge is not shy to appear in her own paintings. In this series, you will also see her in some of her works. In Small Change, Little Changes, she wears a pink dress she seems to have borrowed from the French queen, Marie Antoinette. It is the icing on the cake, a painting full of symbolism and reflection. Usually, birds and flowers are not easy to paint without the risk of reducing them to decoration or symbolic elements. Not with Inge. In Temperance Is Wickedness V: Headspace, you feel as if you are in a jungle, enshrouded by flower arrangements. In The Avian Reptilian Complex, forty birds form a stilled image in which every detail is captured. However, when looking at the painting you feel an urge to say to those birds: “Oh please sit still so Mrs. Aanstoot can start painting you quietly.” 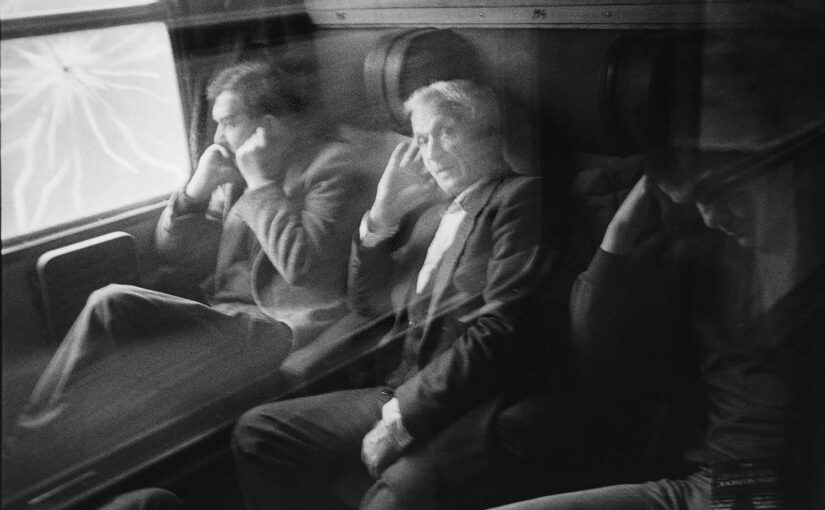 For Finnish photographer Arja Hyytiäinen, analogue photography is the only way to shoot pictures. Her photo documentary series are shown all over the world at art festivals and in galleries. The scenes she shoots seem to capture a frozen second of rawness and eeriness. From her home in France, Arja Hyytiäinen explains to Klaartje Til her life, lived with photography.

SWEDEN
I am originally from Finland but I moved to Sweden when I was 21 years old, because I wanted to study psychology in Göteborg. However, I didn’t enrol into the psychology program and instead, started a photography course at night school. I met people who encouraged me to do something more serious with photography, and I was very surprised when I was accepted to a photography school in Angermanland, in the North of Sweden. At school we spent endless time in the darkroom and we learned how to print and develop films. We did little reportages where you could figure out different types of cameras, to more or less, find your signature.

KARELIANS
Karelians, is the title of my first exhibition, where I showed a photo documentary about Karelian people. For this documentary I lived for one year in a village in the Russian part of Karelia, just across the Finnish boarder. It was a very small village with only six villagers and a few cows. There was no public transport and no electricity. During the winter you couldn’t leave the village because of the snow and no one would clean the roads. After one year I returned to Sweden, to the dark room, to develop the black and white prints for my first exhibition. After my Karelian year I went to Prague to study photography at FAMU. So, from Russia directly to Prague more or less. At FAMU I did my theses on subjective documentary, from Daidō Moriyama to Anders Petersen to Antoine D’Agata. Anders Petersen was, with his pictures, a spiritual father to me. The way he lives with photography touched me a lot. I feel someone being alive behind his images. Anders Petersen and Antoine D’Agata have a street photography background. Their work shows encounters with people and can give you an idea of the smell of the room these people were in.

I made many trips to Hungary, Slovenia, Slovakia, Poland and Moldavia, during my study in Prague at FAMU. The night trains were there, the light was there and I got to know other young photographers while traveling. I photographed a lot and developed the pictures in my bathroom. FAMU wasn’t very happy that I missed so many classes. I left school and lived one year in Berlin before I moved to Paris. I did photography jobs in Paris and lived in Berlin where I developed the photos in a darkroom. I sat a lot in night trains going back and forth between Paris and Berlin. I only felt at home in a night train, because I had left and I hadn’t yet arrived. I lived in night trains for quite a long time until I did an art residency in Marseille, with Atelier De Visu. They published a book, Le Quartier, showing my diary notes and my pictures to illustrate the notes. In Marseille I was busy finding my own language as a photographer. I tried to figure out who I was, traveling all over Europe and living everywhere. It shows in the work I made then, bits and pieces everywhere. A lot of pictures of bars and the Marseille night scene.

GALLERY VU’ PARIS
I wrote a mail to Gallery VU’ and I asked them if there would be any possibilities for me to work with them. I sent them the pictures I made in Eastern Europe. They accepted me and I thought that my whole life would change. It didn’t, until I met Christian Caujolle. He was the artistic director of Gallery VU’ and the organiser of an amazing exhibition with work of Antoine D’Agata. I visited this exhibition again and again. Antoine D’Agata’s pictures deeply touched me, also because of the way these pictures were presented. The show was in Gallery VU’ on Boulevard Henri IV, in an old cellar. The walls were painted red which contrasted with the black and white pictures. The pictures were in different sizes and fitted so well with the cruelty and the insomniac atmosphere in the whole place. It was so well done. At the time I met a lot of big photographers. They were all a bit lost, but somehow they were a family to me. I got some assignments via picture editors I knew, but life was really difficult. Eventually Paris grew cold on me. It became really difficult to find a darkroom. Gradually the darkrooms were shutting down in Paris until there were no darkrooms anymore. I moved back to Berlin where I found a large darkroom.

DARKROOM
In the darkroom time disappears. The importance of the experience that I had at the time when I took the picture, disappears. That’s vital to me because when I am still emotionally connected to the event I photographed, I cannot be objective. What is interesting about fixing a moment in time in an image, is what comes out of it after I have printed the pictures. The images can be so far from what really happened. The story comes afterwards, during editing, when one image starts to talk to another image. In the darkroom I translate a photo to what I want to say with that image. I can highlight with a little white tone or closing up a circle. I always print the pictures myself. I love the process of defining the grain, the heaviness and the cut of the paper. It makes the image. Most of my prints are quite small. Some are smaller than others, but I go up to 50X64 cm at the most. Because I want to go to the essence when I create an image, I don’t want to waste energy on large prints. They are time and money consuming. The darkroom is a time machine where I bring up bits and pieces of a different life. I can go into the darkroom in the morning, when it’s light and leave in the middle of the night. When I come out of the darkroom I am completely in a different frame of mind. It’s like reconnecting with reality, like waking up and seeing things very clearly, for a very short time. That’s magic and wonderful.

ARCHIVES
I haven’t gone back to my archives for a very long time, because they always make me melancholic. I meet myself again because there is so much of myself in each photo. But I think it’s interesting that these captured moments remain in archives and they stay there. An archive shows a time lap because you can go back and forward in time. It is very close to cinema. The French film maker, Stephane Breton, made a film called Chère Humaine. Chère means “dear” in French, but it also means “flesh”. He contacted a few photographers, including me, and he composed a film by using our pictures.

ILES D’ENFANCE
Today I live in the countryside in France. That’s where my daughter was born. With the birth of my daughter, Finland came back to me again. It brought back childhood memories, and memories of the culture I grew up in. My work radically changed then. I exchanged the Hasselblad for a baby wagon, bought a little foldable Fuji 6×7 rangefinder camera and set-up a darkroom next to our house. I travelled a lot to Finland to shoot childhood scenes with this new camera. It resulted in the Ile d’Enfance series, The Island of Childhood. Because the Fuji camera is much slower than the Hasselblad, the pictures became more staged. For example, I would burn leaves in the backyard and my daughter would wrap herself into her father’s jacket, watching me burning leaves. Later I recreated this scene. I reorganised the same scene but the images came from a real life event. I think I always staged the scenes, even when I did street photography. I remember a girl I suddenly noticed in the middle of the night in Malmö, Sweden. She was at a street party and wore a beautiful white dress and a necklace of pop-corns. She told me she was supposed to be a pop-corn. She asked me why I wanted to photograph her. I just laughed and asked her to stand on the other side of the street. I took her out of the context. So I already staged scenes, but today I do more research before I create the scenes and take pictures.

HORSES
As a child I hung around horses a lot. Here in France I have three horses and they changed my life completely. These horses have an energy level that’s visible up to 3 metres away. You can feel this energy. It is a deeper level of communication and completely authentic. I don’t photograph as much as I used to. I still have my darkroom and I give photo workshops here at home. A few years ago, I held a photo workshop for young criminals. These boys came from Paris and they were very different in energy. Standing around a table was difficult for them. The horses acted like magnets. They calmed the boys down. Horses don’t judge, they don’t speak, they are impressive, you don’t fool around with horses. The boys asked whether they could take pictures of the horses. That’s how these therapeutic photo workshops started.

NEXT STOP?
Movement is life, even if it is not directly related to photography or the work I did before. There is a time for everything. Photography has very little to do with photography, like music has very little to do with music. It is all about the output, the experience of what we want to tell with the medium we use. I think I am on this night train again at the moment. I will see where it brings me and how it will feel.