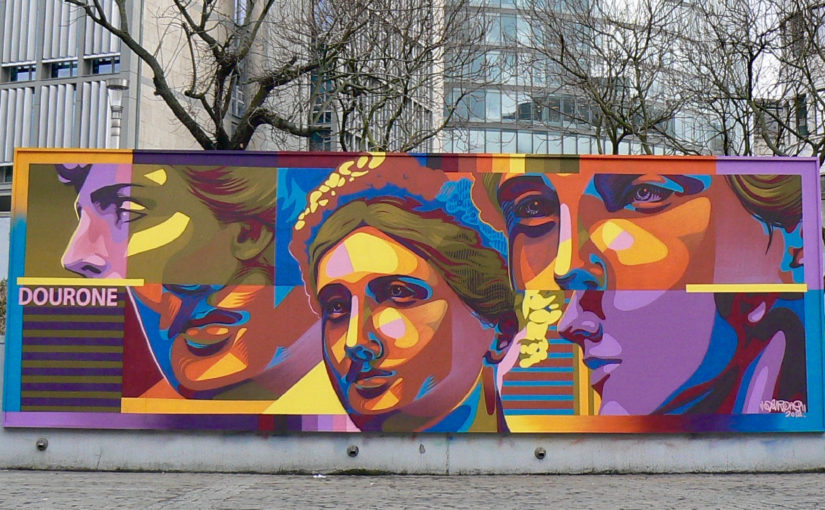 I have only been to Brussels, once. Well, stranded would actually describe the situation better. I had to catch a flight from Brussels Airport, but missed it due to the heavy winter weather. I had to stay overnight and decided to walk the streets of Brussels to soak up the city’s atmosphere. I understood immediately when people describe Brussels as raw. Walking through the broad streets, I felt uneasy. I did not understand why. But after my interview with the Dutch dancer and filmmaker, Jip Heijenga, I began to understand the city. Jip has lived for three years in Brussels, where she also studies film at the Brussels Art School, Sint Lucas. In this article she explains the raw side of this fascinating European metropole.

What kind of city is Brussels?
Brussels has an eclectic mix of people. It has nineteen municipalities and about one hundred and eighty nationalities. That makes Brussels the most mixed city I know. I am very comfortable with that. It fascinates and inspires me.

What do you mean by “mixed city”?
Like every city, Brussels consists of social circles. I noticed that these circles flow into one-another. People know each other from different circles. Everybody is open to other circles. I also noticed that cultures are not separated by neighbourhood. There are so many different nationalities in Brussels, that they have to live together. You cannot separate them because the city itself is already so divided. Belgium is also so divided. Perhaps the reason why people feel at home in Brussels is because it is not a city made up of one nationality. Even though the city is divided, it works very well as a whole.

What do you mean by divided?
Brussels is not unified by language. It is also divided by the large number of different municipalities, and the split between Flemish and Walloon. French and Dutch is spoken in addition to the various languages that people speak from their own culture. Belgium is divided by Dutch and French speaking people, but the real Brusselaars don’t feel Flemish or Walloon. They are from Brussels and are proud of that. There isn’t a real division of districts, not even in terms of wealth. Rich and poor live together. And if I lived one street further along, I would have had to register with another municipality. I live in Brussels, but a bit beyond lie Schaerbeek, Ixelles and Saint-Gilles. These suburbs are separate municipalities with their own city centre. They have different rules and traditions, and are part of Greater Brussels.

Belgium’s Dutch and French speaking is often a delicate issue. Also in Brussels?
The older generation of Walloons expects everybody in Belgium to speak French. Younger people are often multi-lingual. Most of the Flemish people I know in Brussels speak French. But those originating from Brussels speak both French and Dutch. They move in the Walloon circles, as well as the Flemish circles of Brussels.

Is there a Brussels language?
Sure, there is even more than one language. There is Brussels French which is very different from the French spoken in France. There is the Brussels street language, very cool and with a lot of swag, often spoken by young people. And there is an old fashion Brussels language, which is only spoken by Brusselaars but hardly heard anymore in the city. It is a language of the past, a vernacular.

What does Brussels exude with its buildings and public spaces?
The first words that pop up in my mind are, “withered wealth”. There are many beautiful buildings, but they are so poorly maintained. There is a lot of grey and on a grey day the city looks extra grey. Also in that regard, Brussels is a city full of variety. There is a mixture of buildings with different building styles right next to each other. There are many Art Nouveau buildings in the centre of Brussels. The St Lucas Art School is in an old castle and in the area of Molenbeek there are a lot of new buildings. When you walk through Brussels you notice large murals with controversial, sexually explicit scenes.

You already mentioned them, the people originating from Brussels, the Brusselaars. What characterises the Brusselaar?
Visiting small cafes and drinking beer late into the night. All cafes close at a certain hour. For example, some appear to be closed because the curtains are drawn. But behind the drawn half-curtains, they remain open into the small hours. You have to knock on the window for a long time and raise your hand above those half-curtains. Then someone will open the door and let you in. There you will find the Brusselaar, still there at seven in the morning, smoking, chatting and drinking.

Are there cafes packed with mural painters?
The art scene is big but you don’t notice it. There is a techno scene in Brussels, mainly underground. Anyway, Brussels isn’t a city where clubs are the stage for big parties. The coolest parties are often one-off events, or organised only once a year. The hip-hop scene is huge in Brussels. They rap in the Brussels street language. The hip-hop youngsters are very stylish, urban with nineties influences, and little distinction in style between boys and girls. That is also Brussels. Being young and hanging out on the street, buying beer in the night shop, little loudspeakers in the background with hip-hop music, and speaking French-Dutch, till very late, when everybody is drunk.

Does Brussels have its own hero, like Amsterdam has André Hazes for example?
Yes, Jacques Brel. There is a statue of him near Manneken Pis. His music feels like Brussels. Stuffy, gloomy, sad, bleak and full of romance. A mix of it all.

I think Brussels looks raw. What makes it look like that?
It feels raw because it is a cohesion of different cultures and languages. There is disorder and a lack of structure, but that makes it also open-minded. The fact is that everything blends in and is very divided at the same time. That contrast makes the rawness, I think.