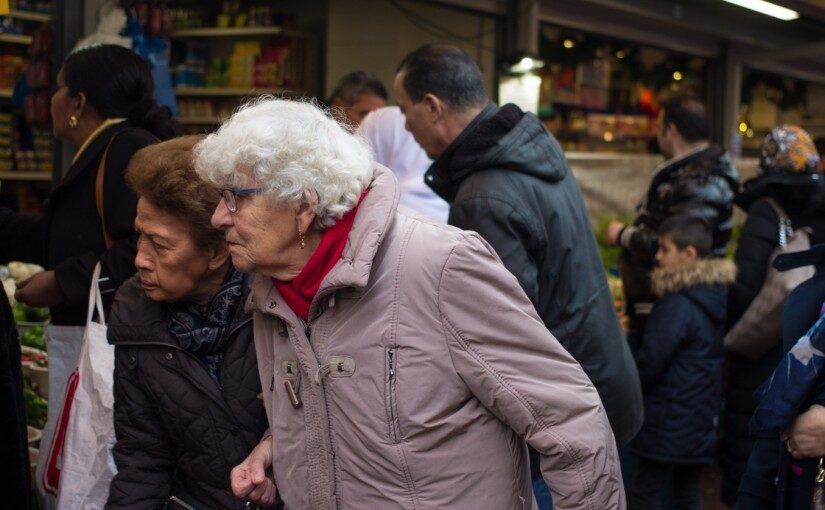 Somewhere in The Hague, sandwiched between Herman Costerstraat en De Heemstraat, in the district of De Schilderswijk, is a hidden enclave surrounded by fences. It evokes a feeling of borders, as if it is a mini country within a city. Four days a week the borders of the enclave open from 09:00 to 17:00. People readily make use of that. On average 35.000 people visit on such a day. It is called de Haagse Markt (The Hague Market), the largest market in The Netherlands and one of the largest in Europe.

But does that mean that this is typical of The Hague? No. If you find yourself in any market in Amsterdam, there is no doubt in which city you are in. But this market could be situated anywhere. Here Suriname is next to Turkey. One street further away, the medina flows seamlessly into the Toko. The Volendam fish shop is next to a booth loaded with Mediterranean goodies. Cauliflower and Brussels sprouts lie side-by-side with the papayas and tajer. 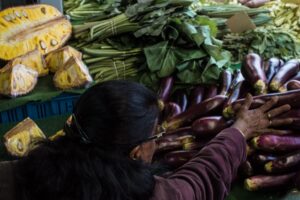 This multicultural place has been popularly referred to as The Stomach (De Maag), from the very beginning: exotic fruit was already available there in 1920. Up until 1938 The Stomach was located much closer to the city centre, De Prinsegracht. Because of the increasing traffic, the market had to move to the current location. In 2015 the market had a turbulent time, an extreme make-over full of the agony of renovation and relocations. So what has changed? It is not a mishmash of 500 booths, containers and trailers anymore. Now there are permanent booths, all in the same style. A solid roof prevents visitors receiving an unexpected splash of rainwater on their neck due to the sagging little canvases. The wide aisles with little gutters in the middle make the difference. There is less of a hold-up, and less of a chance to clash with somebody’s mobile scooter or shopping trolley. No more wading through melting water while standing in fish shop queue. Plus, the digital payer doesn’t need to look for an ATM, outside the market, although there are still booths where paying cash is the rule. However, the permanent residents of the enclave haven’t changed. They give the typical couleur locale that makes you forget that their booths resemble shops now. They come from families that have been selling on the market for generations, and eventually, seem to be happy with their new lockable shops. In any case, displaying and cleaning up is a lot faster.

Although the market has much more to offer, food dominates. If there is a common language in this market then it is the universal language of food. After all, everybody has to eat. In case of an acute snack attack, a world opens for the stomach: from Turkish pizza to French fries, from fried fish to Vietnamese spring rolls, and from samosas to meatball sandwiches. People from many nationalities and walks of life, go to the market. 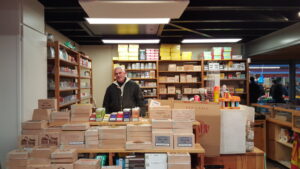 Some for daily groceries, others for curtain fabric, new clothing, a day trip or just for Friday fish. The social code of conduct feels almost rustic. People who, outside the market, would never meet, let alone talk with each other, stand together, wondering which dates will taste the best. As a visitor you are bound to see products you are not familiar with. Just ask. If the salesperson is too busy, nine times out of ten, a fellow customer volunteers to be a source of information. Sometimes with tips and recipes you wouldn’t find in any cookbook.

Of course The Stomach is not a Walhalla. Like anywhere else you have to watch your bag and sometimes there are quarrels and irritations. If you don’t like people squeezing themselves to your left and right to reach the busy booths, then you are better off staying far away from the market. 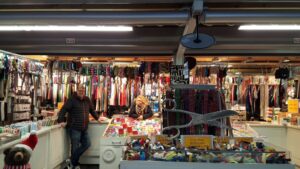 But generally the spirit of tolerance and respect is everywhere. If having dinner together brings fraternisation, then buying food at The Stomach of The Hague comes second. The Stomach’s new style fits the needs of today’s spoiled consumers, but its atmosphere is familiar and has something for everyone. Whether you are there: on a gourmet safari, scoring your daily meal, just want to do some fun-shopping or to enjoy the place. A visit to this three football-field-wide part of Schilderswijk, feels like a trip to another town. Wherever that town may be.