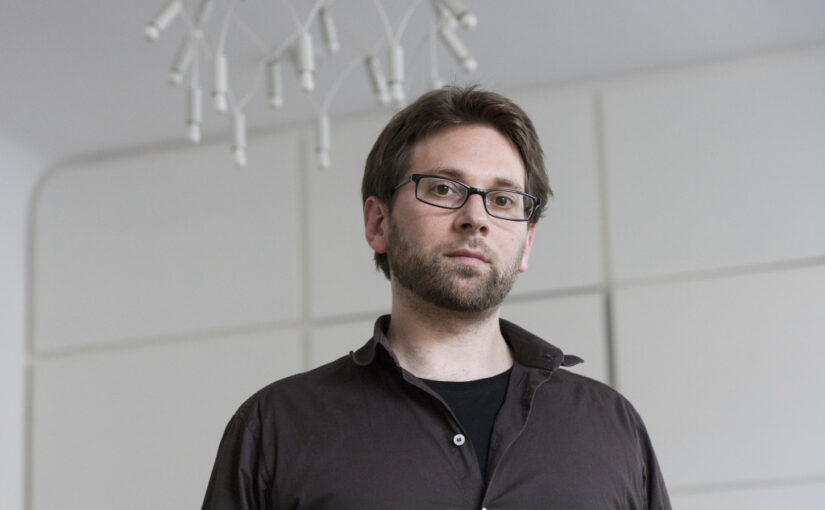 “Philosophy is all about asking questions instead of finding answers. So I hope I have answers for you!” Those were the first words of philosopher André Schütte, after Anne van der Heiden asked him if it was ok to bother him with questions about time. It turns out André had a lot to say about time.

Let’s start with the perception of the concept of time. Can you tell me a bit about it?
There are two different ways of experiencing time: cyclical and linear. A cyclical perception of time is based on the continuous repetition of events. We see that in nature, for example, day and night, and the change of season. The cyclical perception of time we see in pre-modernist and Asian cultures. The linear perception is particularly dominant in modern Western culture where time is considered as an arrow that begins in the past, is currently in the present and ends somewhere in the future. Some linear theories assume that this arrow has a beginning and/or an end, like the Big Bang theory, or eschatology (the faith in the end of time, Ed.). But there are also theories that believe that time is infinite and therefore has no beginning or end.

Well we were both born and raised in a Western European culture, so what does the linear perception of time mean to us?
It means that we consider humanity to be the subject of time or history. In other words, we humans have the opportunity to influence the course of events. Plus, we consider time to be scarce.

There is too little time, so let’s get the most out of it? Carpe diem?
Exactly. Making the most of it implies creating new ideas and discovering new things, because we can never be sure that our current social climate offers the most optimal living conditions. In order to create and discover, we need to critically examine our society, our institutions, and our way of life. You could even say that criticising and creating are two sides of the same coin that shows the modern world’s motto: we need to improve because we have so little time.

But how did we get to this perception of time?
Let’s start with Comenius (theologian, philosopher, educator and politician: 1592-1670, Ed.). His answer to the linear part of Christianity, the faith in the end of time, was: “We can’t wait, we have no time! We must teach young people the principles of everything that can be known, now. We need to build schools, publish books, learn everything as quickly as possible.”
The sociologist Hartmut Rosa (1965 – ) reacts differently. He assumes that Western modern society is characterised by social acceleration. Everything accelerates due to capitalist progress and technological progress. He writes about the process of “shrinking” the present. By which, he means that the duration for future prospects to become reality, is getting shorter and shorter. If you combine this with the ever-increasing pace of technological development and the increasing pace of life that comes with it, time seems to fly even faster. You constantly feel the pressure to be doing something, in order to acquire capital. Our relationship with others and the world in which we live therefore becomes increasingly problematic.

Comenius and Rosa both have a linear perception of time. Why does Comenius focus on a positive aspect of time, improving life by learning, while Rosa focuses on the social problems caused by technology and our fast-paced society?
These are indeed two almost identical observations of time with completely different outcomes. The historical context is crucial here. Reading a text is never enough. To understand the text you also need to know the time in which it was written. So let me make a statement: the time in which we live determines our perspective, how we experience time. Heidegger (1889-1976), one of the founders of existentialism, believed that our essence is not in our thinking, but in Dasein, literally meaning “standing in the world”. The only way we can’t be there is by dying, so to get the most out of your life, you have to face your own death.

The end of times versus the end of life?
Yes. But Comenius has a positive, even joyful, view on life, while Heidegger’s Dasein is all about fear. Comenius had another point, he was sure that creation was good. His urge to reform the world had only one purpose: to restore the original order in which God made the world. Heidegger lived in a more secular society and he lived through World War I, when he wrote his ideas about Dasein. The fear of the soldiers, the fear of death, war, depression. His focus on death is hardly a coincidence.

Let’s look at the present. A popular ‘life philosophy’ at the moment is mindfulness, focusing on life in the here and now. How does that fit into the perception of time?
At the moment our lives are getting faster and faster. Too fast, so we long for a slower pace. We would rather have time to enjoy life again than feel constantly rushed.

What about synchronicity, a relatively ‘new’ philosophical term (1930, Carl Jung), how does it fit in the perception of time?
Not only do we live in a time of social and technological acceleration. We also live in an era of synchronicity. We know what time it is in any part of the world. We know that others are aware of this and that they know that we know. We live in a synchronised way, so to say. Not so long ago, travelling was quite a challenge, and we knew we would arrive at our destination sooner or later. Today ‘late’ or ‘too late’ no longer exists. News synchronises the world. The moment we get out of bed, we have access to everything that happened around the world while we slept. We live in a time of globalization and acceleration, and we expect things to be completely changed tomorrow.

Does it make any sense to study philosophers from the past to learn from them? Or should we leave the past, because we are suffering from a sort of collective memory loss and we are only reinventing ideas when we need them?
I think it’s a combination of both. With the passage of time our culture and our society changes. An old theory may no longer be applicable. We may need to adjust our perception, reinvent or reform the theory. But without the past we are nothing. It is a modernist idea that everything new is by definition good and that you can’t find anything new without drastically breaking with the old. That’s good, even liberating. But the past can also help us, as beautiful memories or traditions do. This implies that we should try to combine acceleration with a certain form of slowing down. There are people who already work that way and we can learn from them: DJs, contemporary designers and all those ‘green’ people who try to make our way of life more sustainable. These people love recycling, and use old materials to make something new. A great example of how you can look forward and back at the same time if you ask me!

You are specialised in the philosophical theories of Peter Sloterdijk. What is his view on the concept of time?
Sloterdijk certainly has interesting ideas about this. He wrote a book entitled: You have to change your life (Du muβt dein Leben ändern). In this book he states that humans are the only beings that practice. Everything we do is in fact a repetition, but we can give this repetition a goal, we give it direction, make a plan and aim for perfection. When we look from that perspective at the time it takes us to learn something, we see a combination of a circular and a linear movement. We see repetition but with a final goal. This means that the way we, as learning humans, move within time is a sort of spiral. But that spiral has an end: perfection. This learning process has surprisingly much in common with contemplation and mindful living with the ultimate goal: to become a complete human being.